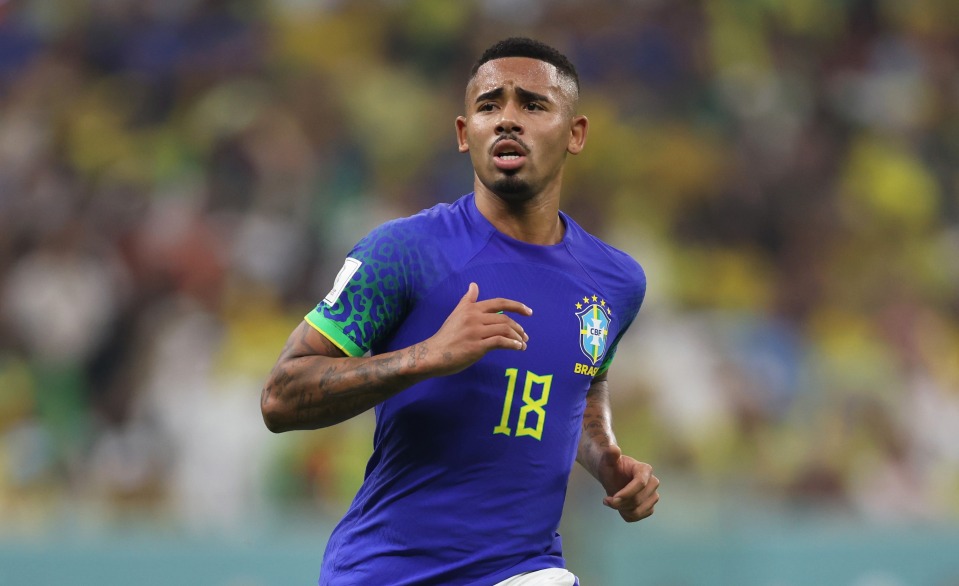 Arsenal have been dealt a huge blow in their quest to win a first Premier League title since 2004 with Gabriel Jesus undergoing knee surgery.

The Brazilian striker was ruled out of the World Cup last week after experiencing pain in his knee during the Selecao’s 1-0 defeat to Cameroon.

And Arsenal have released a statement where they announced that Jesus has underwent a successful operation.

It read: “Gabriel Jesus has successfully undergone surgery to his right knee after suffering an injury during the Brazil v Cameroon World Cup group stage match on Friday.

“Everyone at the club is supporting Gabby and will be working hard to get him back on the pitch as soon as possible.”

There is no timescale on his return, but it is believed he could have up to three months on the sidelines.

According to The Daily Telegraph, Jesus has suffered suspected medial ligament damage in his right knee.

Most read in football

It was initially reported how the 25-year-old was only set to miss a month of action with surgery not needed to fix his issue.

Jesus has been instrumental in helping Arsenal reach the summit of the top-flight – despite him not scoring since the start of October.

His injury could now force Arsenal to sign a new striker in January to ease the burden on Eddie Nketiah.

Arsenal were already preparing to bolster their attack in the new year with Shakhtar Donetsk winger Mykhaylo Mudryk a reported target.

But it remains to be seen whether they will bring in a centre-forward – especially with Emile Smith Rowe to return from injury.

Boss Mikel Arteta could also decide to deploy winger Gabriel Martinelli into a false nine role should Mudryk be brought in.

England forward Bukayo Saka has revealed he sent a text message to his teammate after being left gutted when he heard about Jesus’ injury news.

Speaking to the media on Monday, he said: “He’s a very, very, very important player for us [Arsenal] and it’s not good to hear the news.

“Obviously I’ve messaged him and I think he’s going to see the doctor and see what he needs to do for the next steps.

“It’s definitely not good news when I heard that.”

Meanwhile Brazil manager Tite has slammed speculation that he knew Jesus was injured when he called him up for his squad, labelling it as ‘evil lies’.