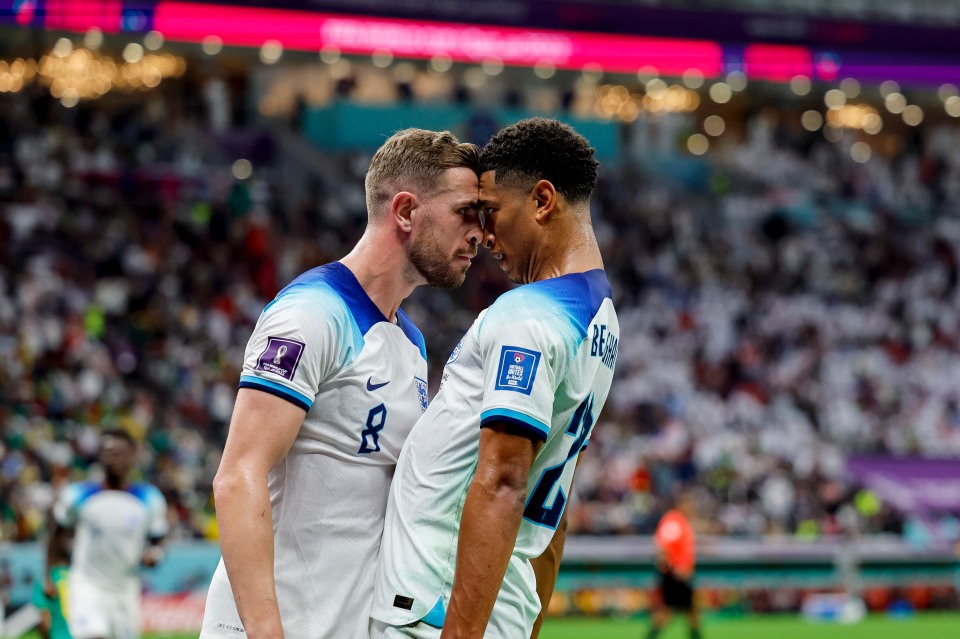 Jordan Henderson and Jude Bellingham shared a passionate celebration after England’s first goal against Senegal at the World Cup.

The midfield duo went head-to-head and stared intensely into each other’s eyes, and now Bellingham has explained what truly went on at the Al Bayt Stadium.

Henderson netted the opener in the Three Lions’ victory on Sunday, with Gareth Southgate’s side going on to win 3-0 to set up a quarter-final tie against France.

Bellingham was on hand to assist the Liverpool captain, which sparked the already-iconic celebration with the 32-year-old.

“That was completely off the cuff,” he explained on England’s ‘Diary Room’. “We’ve never even spoke about if I was to get an assist for him or whatever.

“Obviously we’re spending a lot of time with each other at the minute, but that was completely off the cuff. I think it’s turned into something that’s a little bit iconic.

“To be honest, he got so close and I was thinking ‘right, is this what we’re going to do, we have to commit don’t we?’ So I went and he went really hard you know, proper hard.

“And that’s why my back is arched like that because I’m thinking ‘he’s proper hard here and he’s proper close’, so I just had to turn the core on a bit, lean forward and get into a bit more of comfortable position.

“It was a good moment, something that lives forever them kind of celebrations and hopefully people will be talking about it for a long time.”

Bellingham has been linked with a move to Liverpool, a transfer that would see him play alongside Henderson for both club and country.

He had nothing but praise for his international teammate when he added: “He’s always kind of the loudest player on the pitch, which I love. You always know you’re in a game.

“He doesn’t let you switch off for one second, and I think the best thing about him is he will give you a bit of detail to help you, maybe after you’ve done something negative.

“But he’s the first person if you’ve done something positive to let you know. His performance yesterday [against Senegal] was incredible. Ran the game, scored a key goal, and it was a pleasure to play with him yet again.”

Given their performances against Senegal, it wouldn’t be a surprise to see Bellingham and Henderson start against France on Saturday as England eye a spot in the semi-finals.

Moises Caicedo to Arsenal, Enzo Fernandez at Chelsea, Pedro Porro with Tottenham and shock Jorginho move – 11 transfers that can be done on deadline dayJoe Brophy