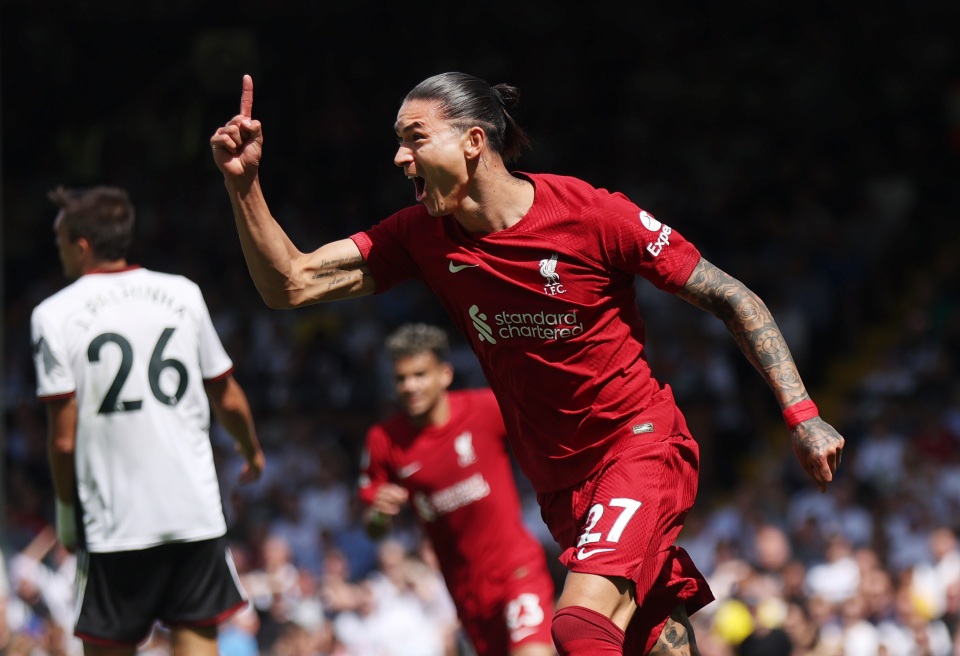 Jurgen Klopp believes that Liverpool owe their point against to Darwin Nunez after the new signing changed the game at Craven Cottage.

The Reds traveled to west London in what many assumed would be a walkover, however a brace from Aleksandar Mitrovic earned Fulham a 2-2 draw against the Reds.

The Serbian striker gave Marco Silva’s side the lead with a first half header, before Nunez levelled the game just after the hour-mark.

That scoreline lasted just eight minutes before Mitrovic put Fulham ahead from the penalty spot, and then Mohamed Salah clawed the game back for the Reds once again.

While Klopp was pleased to see his side escape from Craven Cottage with a point, the Liverpool boss believes that their £85million new signing got them out of jail.

He told talkSPORT: “A striker depends massively on deliveries and we didn’t play well.

“Yes, we had these moments and Mo [Salah] found a way when the service was right and yeah, Darwin helped a lot.

“Without Darwin, we probably wouldn’t have a point.”

Klopp added: “It was a very bad game from us. I didn’t like our start, our start was wrong and we fought back into the game but it never looked easy for us.

“It was too much in Fulham’s hands. We lost the ball where they wanted us to lose the ball and there were too many situations where they could have a good feeling and we could have a bad feeling. We had the bigger chances but missed them.

“We had the momentum for five minutes are Darwin equalised which was good, but then we conceded the penalty which made it difficult again.

“The best thing about the game was the result. A point here for this performance is okay.”

Meanwhile, Fulham boss Marco Silva is is adamant that his team deserved more than a draw.

He told talkSPORT: “For us it’s easy to understand why our players were the way that they were after the match.

“In the dressing room they were pleased with the performance, but disappointed with the result because we were almost there for the three points but only got one.

“We are pleased with it because we deserved more than that, but we showed a great attitude, a great commitment because there were good moments of football as well and we are happy with that.”