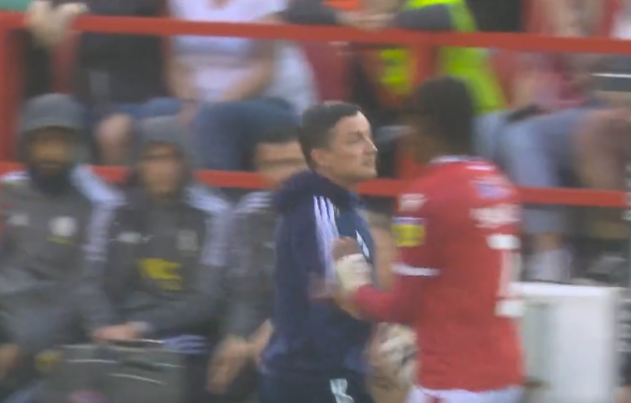 Sheffield United boss Paul Heckingbottom was ‘lucky not to be sent off’ following an incident with Nottingham Forest defender Djed Spence.

Seemingly frustrated with the time Spence was taking to take a throw-in in the Championship play-off semi-final, the Blades boss picked up the ball before shoving it into the lower part of the Forest full-back’s stomach.

It sparked an almighty melee by the touchline between both sets of players with the Forest faithful calling for Heckingbottom to be sent off.

Referee Michael Oliver deemed a yellow card as the appropriate punishment, something that didn’t sit well with talkSPORT’s Adrian Clarke.

“That was a disgrace from Heckingbottom… he’s lucky to not be sent off,” Clarke said on commentary for talkSPORT.

“I’ve seen managers get sent off for a lot less… Michael Oliver has been generous to Heckingbottom.”

“You can’t be physical with a player, you just can’t… Michael Oliver let him off the hook,” Clarke added at half time.

Heckingbottom’s frustration no doubt came as a result of his side being two goals down on aggregate in the semi-final tie.

Having lost the first leg at Bramall Lane 2-1, Sheffield United got off to a bad start at the County ground as Forest took the lead on 19 minutes.

The goal was scored by Brennan Johnson, who finished first-time as he latched onto Sam Surridge’s low cross from the left.

However, Heckingbottom’s side hit back right at the start of the second half as Morgan Gibbs-White levelled the scores on the night.

The winner of the tie will face Huddersfield, who got the better of Luton, in the play-off final at Wembley on May 29.