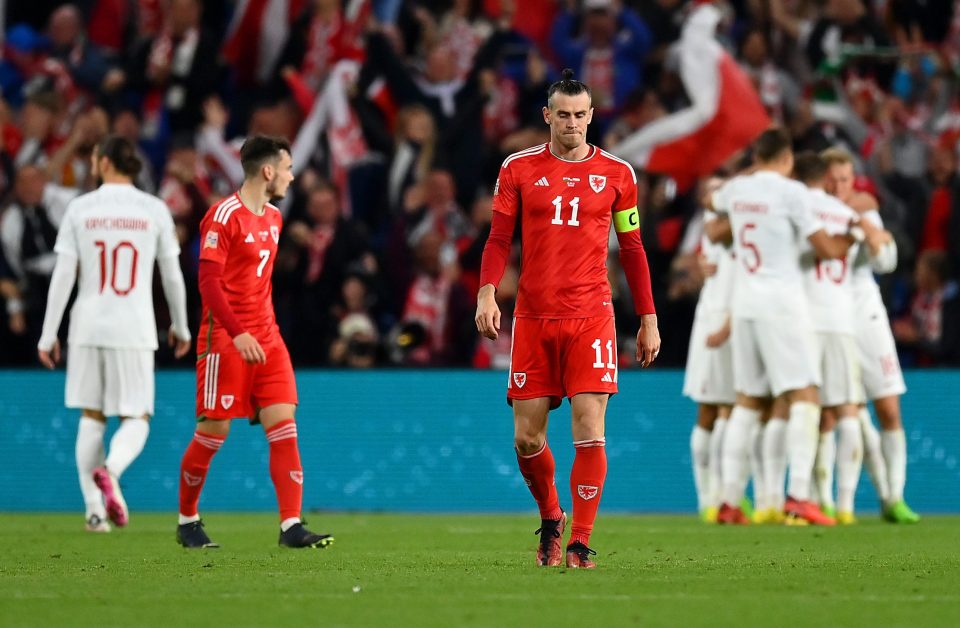 Wales suffered the same fate as England with Nations League relegation as they fell to a 1-0 defeat against Poland.

Rob Page’s side will follow England, who they face at the World Cup in Qatar, into League B of the next edition of the tournament.

The winning goal was scored Karol Swiderski, who slotted the ball underneath Wayne Hennessey.

He was given the easy finish thanks to a classy moment from Robert Lewandowski, who provided the assist as he deftly teed Swiderski up by expertly taking the sting out of a powerful ball from the left.

But Poland goalkeeper Wojciech Szczesny played a bigger role in denying Wales the win with a number of saves.

Meanwhile, Gareth Bale was denied in stoppage-time as his powerful header came back off the crossbar.

This was Wales’ final game before their first at a World Cup for 64 years, their Qatar opener against the United States on November 21 being less than two months away.

Bale was a second-half substitute in Thursday’s 2-1 defeat to Belgium after arriving late on camp from America due to his playing commitments at Los Angeles FC.

The 33-year-old completed his first 90 minutes since the World Cup qualifier against Estonia last September.

Ben Cabango, Joe Morrell and Dylan Levitt also stepped up from the bench in Brussels, with Kieffer Moore – Wales’ goalscorer in Belgium – among the substitutes.

Poland, 26 on the FIFA rankings and seven places below Wales, were led by Barcelona striker Robert Lewandowksi and in need of a World Cup tonic themselves following some stuttering form.

There was a fast tempo to the opening exchanges but few openings in a lively first half notable for the amount of time Poland players spent on the floor.

The visitors’ willingness to go to ground, and stay there, angered home fans and raised the temperature inside the Cardiff City Stadium.

Swiderski almost pounced as Joe Rodon let the ball run back towards his own goal.

But the first goal attempt took 25 minutes to arrive when Lewandowski met a cross with his shoulder, rather than his head, and Wayne Hennessey safely gathered.

James’ effort was blocked by Wojciech Szczesny, and the Juventus goalkeeper kicked away the winger’s follow-up cross with an outstretched leg.

The contest was suddenly opening up and Szczesny was out from his goal to smother after Connor Roberts’ long throw had found Bale.

Hennessey almost suffered embarrassment after letting a back pass roll under his foot. The goalkeeper had to stretch a long limb on the goal-line before clearing under pressure from Lewandowski.

The deadlock was broken after 57 minutes, and it owed as much to the brilliance of Lewandowski as the expert finishing of Swiderski.

Lewandowski’s sublime flick freed Swiderski for a controlled shot that went through the legs of Hennessey.

Wales almost replied instantly as Johnson wriggled free for a shot which Szczesny tipped around a post.

Moore and Rubin Colwill were sent on as Wales went for broke.

Szczesny showed his agility again to deny James and Rodon headed over, and Wales knew their luck was out when Bale’s header bounced back off the bar.

Messi´s legacy will not be harmed if he fails to win World Cup, says GuediouraSoccerNews